What You Need to Know About Native American Sweat Lodge Ceremonies, and How To Build Your Own

It may be hard to believe, but thermaculture is perhaps more deeply rooted in America than Finland. The Sweat Lodge was central to tribal culture from the Alaskan Eskimos to the Mayan cultures of South America.

Like Finnish Sauna, the sweat lodge serves the function of deeply cleaning the body, but the reasons go much deeper than that. It is as much about the spirit as it is the body.

Powered by glowing red rocks, the sweat lodge is a sacred place for ceremonies, cleansing, and reconnecting with the earth and ancestors.

When English settlers began to notice that sweat lodges were important to their religion, they treated the practice as a threat. Government officials and Christian Ministries banned the use entirely. In fact, sweat lodge ceremonies were outlawed until August 11, 1978 when Congress passed the American Indian Religious Freedom Act.

For some tribes, like the Navajo, there were many sacred topics, chants, and procedures that could not happen outside of the sweat lodge. Unfortunately, squashing the sweat lodge was an effective way to squash much of the cultures, some which would be lost forever.

Thankfully, a few tribes were remote enough to preserve the tradition unbroken, while others have reconstructed and brought back the practice of their ancestors.

Calling upon spirits is central to the ceremony. In Anishinaabe sweat lodges, the following spirits are part of the practice:

… All those that sit in the Four Directions;
… those witnessing from the Spirit World via the Western Doorway;
… the Spirits in each of the heated rocks (the Grandfathers);
… Mother Earth – whose womb we are inhabiting;
… the Spirit of the Lodge itself, Mide Oshkawbewis;
… the Little Boy who resides in the water drum that is passed around the Lodge;
… the Spirit in the pipe and so on.

Outside of the Lodge, there is the Spirit of the fire, the Firekeeper and helpers, and the trickster Spirit must always be kept in mind.

Don’t forget that each and every one of us that participates in the ceremony has a Spirit. We are all called, acknowledged, do our work and are fed in the Lodge as well.

It is a serious practice that can’t be done by new age gurus. We caution, whatever you are doing – don’t call it a sweat lodge unless you have a native guide.

A must read resource for understanding the reasons and rituals of sweat lodge ceremony is Mikkel Aaland’s book ‘SWEAT’, where he was actually invited to take part and document ceremonies with several tribes.

Aaland notes several interesting similarities and differences between the rituals.

The Sioux, for example, see the interior of the sweat lodge as representing the womb of Mother Earth, its darkness as human ignorance, the hot stones as the coming of life, and the hissing steam as the creative force of the universe being activated. The entrance faces east, source of life and power, dawn of wisdom, while the fire heating the rocks is the undying light of the world, eternity.

The hot rock method is by far the most common practice among North America tribes. Rocks are heated in the open outside the sweat lodge, much like a regular bonfire. When the rocks glow red, often several hours after starting the fire it’s time to move them into the lodge with antlers, a pitchfork, or shovel.

The lodge for the hot rock method is typically a low dome, or hive structure made of sticks (willow is popular) or reeds, and covered with canvas, cloth, and/or animal skin. These were an ancient precursor to the “mobile sauna” movement that is popular in modern times.

Permanent structures, typically in warmer climates could be constructed of mud, sod, stone, or timber. These are similar to ‘Hammam’ saunas in the Middle East, and southern Europe except they use hot rocks for heat, instead of steam.

In either case, the dark interior of the sweat lodge was often meant to represent the womb of Mother Earth, particularly in Sioux tribes.

Once glowing red, rocks are placed into the sweat lodge, a few at a time by firewatchers. There is typically a depression near the door or center of the sweat lodge where the rocks are carefully placed.

The leader will enter the lodge and prepare the space, inviting the group in when the space reaches the proper temperature.

Water is poured on the rocks, as it is in traditional Finnish sauna. Instead of a ladle, native tribes would often use a buffalo horn or broom to sprinkle water on the rocks.

A Note On Protecting Sacred Traditions and Culture

The Sweat Lodge is a sacred tradition, and while elders want to keep their traditions alive, we respect that it shouldn’t be commercialized, co-opted, or marketed by those outside the community.

Sweat lodges are easy to make, but “without a medicine man or spiritual leader, it is not an Indian sweat.”

However, a full picture of ancient steam bathing cannot be complete without including the sweat lodge traditions in the Americas.

We think it’s possible to learn from ancient traditions, and create our own practices that may be strongly influenced by sweat lodges but by another name. Paying homage without claiming to be practicing a sacred tradition of others.

Understanding that thermaculture is as deeply rooted in the Americas as in Finland shows just how wide spread and core to our human existence sauna and sweat culture are.

The similarities between native tribes and unconnected cultures throughout the world beg the question, “is there something deep within humans that is fed by thermaculture?”

How To Build a ‘Sweat Lodge’

How To Build a Sweat Lodge
A sweat lodge structure is a DIY friendly project that can be built in a day with materials you may already have. The design is also a great survival structure, and surprisingly strong.

With the correct materials, building an Indian Sweat Lodge is not much more difficult or time consuming that assembling a tent.

See the video below for more details.

Materials:
Stakes, String, Small Shovel/Digging Tools, six 8-12′ sticks, twine or willow bark to tie sticks together, blankets/animal skin/canvas/or combination, metal bucket, laddle, igneous or solid granite stones
Draw Your Circle
Put a stake in the center of your lodge site – it should be a relatively flat area in the dirt or grass.

Use twine or rope with a stick or tool at the other end to draw your circle. A 4 foot string would be the minimum recommended size (8 foot circle). The larger the tent, the harder it will be to heat. 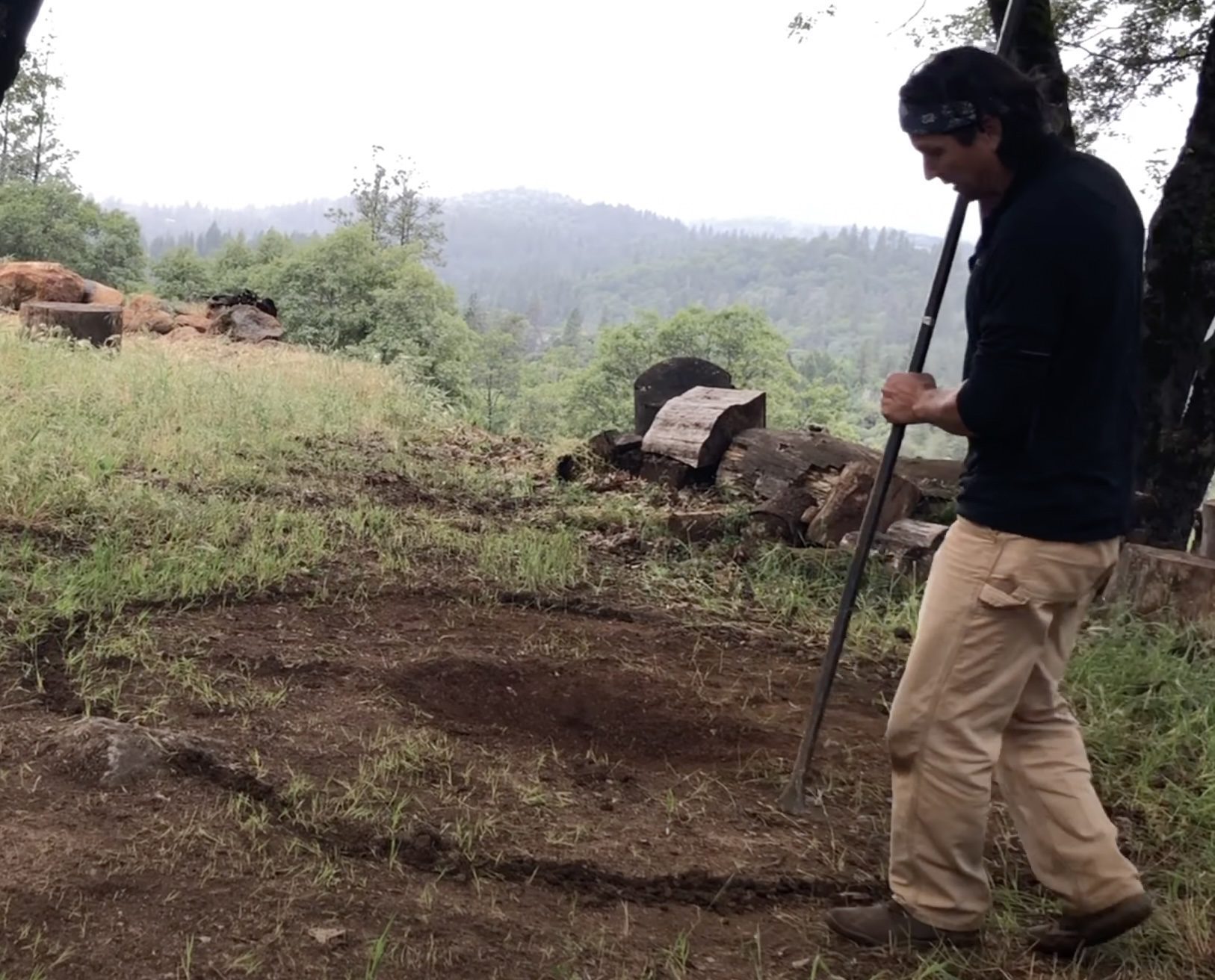 Place the poles in the ground and bend them together
Dig out the circle 4-6″ wide all the way around the perimeter, loosening the soil to make it easy to place your poles into the ground. Each stick will meet its adjacent stick near the middle of the dome.

Traditionally, the door opening would be on the east.

Once you have the circle dug out, push sticks into the ground in their perspective locations, standing straight up for now. Add dirt around each pole. Now would be a good time to also dig out a hole in the center of the tent where the stones will sit.

Now that we have the poles firmly in the ground, bend them together to meet the adjacent pole. Tie them together with straps, twine, or zip ties if you don’t mind using modern materials.

Native Americans typically used strips of bark wrapped several times around the structure, avoiding knots as they would break the bark.

Add ribbing for support
Use smaller sticks and branches to built one or two inner circles in the structure for added structure, and to support the blankets (next step). Ribbing could also be done with twine or flexible bark.

Cover the Sweat Lodge
Cover the structure with natural materials like wool blankets and a natural painters canvas. Traditionally natives would use animal skins, or buffalo robes. Avoid plastic and anything that might off-gas in the heat.

See the entire process below:
SaveSavedRemoved 0

The Chicago Sauna Scene Has It All

The Chicago Sauna Scene Has It All

What You Need to Know About Native American Sweat Lodge Ceremonies, and How To Build Your Own

All information published on this website is provided in good faith and for general use only. We can not guarantee its completeness or reliability so please use caution. Any action you take based on the information found on Sauna Marketplace is strictly at your discretion.